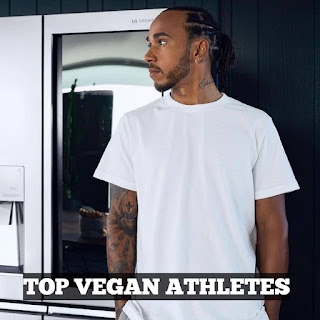 More people are turning to veganism. The very benefits of veganism is it will protect you from diabetes and blood pressure. In the past five years many sportsman from boxing, car racing, football have announced themselves as vegan. Many people have raised their concern over proteins present on the plants and vegetables. Now the vegan diet have proved that it has equal amount of protein then that of meat diet. Broccoli and soybeans have equal amount of protein then chicken breast. Let us see the top famous vegan athletes in the world and also let us see what vegan athletes eat?

Who are vegan athletes?

What do vegan athletes eat?

a. Vegan athletes eat a lot of brown rice. Brown rice contains a lot of fibres that will improve your metabolism. Having improved metabolism means weight loss and healthy lifestyle. Brown rice will also improve your overall heart health. For the athletes who are doing running and other cardiac exercise brown rice is very useful for them.

c. Vegan athletes drink a lot of fruit juice especially lemon and oranges. Lemon and orange contain a lot of antioxidants, fibers and minerals which are essential for your body. Drinking lemon juice regularly will detoxify your body and improve your overall health.

Scott Jurek is ultramarathoner from the United States. Scott jurek was from Minnesota and own several awards including hardrock hundred, badwater ultramarathon and spartathlon. Scott jurek was vegan for more than two decades. He strongly believed in veganism to improve his body composition and mental health. Scott jurek want his fans to be vegan and to be mentally strong.

Tia blanco is a Filipino born American surfer and influencer. She won the Surfing Association and World surfing Championship. Tia blanco veganism came from influence of her mother. From the very young age Tia Blanco's mother made her to be a vegan. Now Tia Blanco is one of the top fifty surfers in the world. Tia Blanco advises her fans about the importance of being a vegan and how it will improve your mental health.

Meagan Duhamel is a Canadian pair skater with partner Eric Radford. Meagan Duhamel got silver in 2014 Olympics and gold in 2018 Olympics. She said it was easy to be vegan than quitting diet coke. Meagan Duhamel said she is proud of leaving lesser carbon footprints. She shares her favorite vegan meals on her Instagram page.

David Haye is a british boxer who was active from 2002 and 2018. He have two world championship award World. David Haye was the first British boxer to participate in Amateur Boxing Championship. He won the silver medal in 2001. David Haye is one of the inspirational vegan boxer. He achieved all those muscles through beans and chickpeas.

alexandra Morgan is a American soccer player. Alexandra Morgan guided the Orlando Pride and United States Soccer team from 2018 to 2020. She scored match winning goal against Canada in London Olympics. Californian star advices her followers to go vegan. Alexandra Morgan shares her vegan diet and workout to her fans.

Kyrie Irving is an American basketball player who play for Brooklyn Nets. He was selected as the Rookie of the year after being selected by Cleveland Cavaliers in 2011. Kyrie Irving won NBA championship with the Cavaliers in 2016. Kyrie says he feels great after turning to vegan and able to focus more on my games.

She became vegetarian after watching the movie Earthlings. Veganism made her to rethink of her life.

It is very rarely that vegan athletes will take supplements. In those days there was a myth that veganism won't give you enough Minerals and nutrients. Now it is scientifically proved beans and legumes will give you the same amount of protein that of beef and chicken breast. You can get everything from protein vitamins and minerals from vegetables. Even the fats you could get from vegetable oil like coconut oil and olive oil. Veganism will bring you serenity and focus on your sports.

The main benefits of veganism is it will maintain low glycemic index. Being a vegan means you will have low cholesterol level on your body. Veganism will help you in controlling sugar and cholesterol level in the body. Secondly veganism will help you in concentrating on your work especially if you are a sportsman. Veganism will keep your stomach healthy and clean. The more green salad you eat, the more clear your mind will be.

These are my top famous vegan athletes in the world. From football, basketball, snowboard and skating. From all the fields,  they are the topers in thier sports. These people have proved that through veganism you can achieve body health and mind health. These vegan athletes also ask their fans to follow veganism and help our nature.

Vegan athletes gets their protein from legumes, broccoli and spinach. Legumes and broccoli have enough protein which is equal that of chicken breast. Vegans take chickpeas and Beans after their workout which will improve their body muscle.

Yes. Vegan athletes are stronger from boxing to gymnastic. There are many vegan sportsmen from all the fields. Vegan diet like legumes and broccoli will give you the same amount of protein and iron you get from red meat. David Haye is a famous vegan boxer from England.

No. Vegans gets their protein from legumes, broccoli and spinach. These vegetables have enough protein compared to meat. Eat a bowl of nuts regularly to meet your protein needs.

Yes. If you want to build your muscles. Creatine can't be found in plants. You can get creatine by synthetically from sarcosine and cyanamide. So, it's completely vegan.

Food for hair growth and thickness.

November 26, 2018
Food for hair growth and thickness. Top foods for your hair growth and thickness. After 25 many youngsters feel the sudden hair fall. Hair is very important part of a human body. A  face is not complete without hair. Unfortunately hair fall related to genes. If one of your parent have bald hair, sadly it will take a lot of work. But if your parents have good and thick hair. There's more chance that you can get all your hair back. So what are the reason behind hair fall. Not only for hair fall but also for cardiac, obesity and diabetes. The major reason for all those health conditions are fast food culture. Do you know out of whole India Assam is the only state that produce crops without pesticides. A model eating pizza in a TV ad doesn't mean she is really healthy. It's just a click bait to attract more customers. Rise of fast foods in India like noodles, fried rice and Parotta became a regular food for every middle class in India. Strictly avoid fast f
Read more