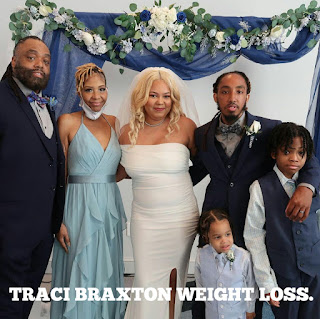 Traci Braxton was attending the wedding of her son Kevin Surrat Junior on july 4 this year. The WE tv star shocked her fans with her thin look. She has transformed from being chubby women to seriously ill person. The "Braxton Family Values" star almost look unrecognizable in her new look. What happened to our favourite singer or is she going through any medication. Let's see about Traci Braxton weight loss story. Also about Traci Braxton's relationship with her husband Kevin Surrat.

Traci Braxton was born on April 2, 1971 on Severn, Maryland. Her father Michael Conrad Braxton was a power company worker and her mother Evelyn Jackson was a cosmetologist and singer. Traci Braxton has four sisters and one elder brother. Her elder brother name is Michael jr and she has four sisters Toni, Trina, Towanda and Tamar. All working in the television industry.

In 1990 the Braxton sisters got the opportunity from Arista Records. The sisters continued to release several albums all of them were medium hits. Four years later Arista Records withdraw the contracts from the sisters. Adding more trouble to their music ambition the pregnancy of elder sister Toni gave them more trouble. Toni is the lead performer of the Braxton sisters and they have to look for the other options.

On 2011 the Braxton sisters ran a reality show called "Braxton Family Values". The show was a huge hit on WE tv. The show tells the story of Braxton family and their ups and downs. The shows success gave Traci Braxton the opportunity to move further in her life. She released her next album "Crash and Burn" which became top in Billboard Hot 200.

Traci Braxton on her diabetes.

Traci Braxton was suffering from diabetes for a long time. During a podcast interview the American singer had revealed that she was suffering from type 2 diabetes and she have to be very careful. Traci was not sure when did it came. It was like 20 years ago that she found that she was having diabetes and have to be careful with the food she eat. Traci Braxton constantly check her sugar level and eat only specific foods. On the recent wedding celebration of her son Traci's new look shocked everyone. Tracy Braxton was almost unrecognisable with her look. She was shockingly so thin and so sick. Traci Braxton's fans expressed their concern over her health on instagram.

Diabetes occurs when our Immune system attacks the Beta cells of pancreas. During this time our pancreas lose the ability to produce insulin. Technically there is no cure for diabetes. Diabetes is one of the leading killer. The only way to cure diabetes is to have the control of our blood sugar and blood pressure of our body. The more serious concern of diabetes is foot ulcer which is your legs turn black and started to decay. Even a small wound will create an big impact on your leg.

Traci Braxton denies rumours of any surgery. Traci Braxton knows that her body is not capable for any surgery. Her husband Kevin Surrat was with her in hard times. The very first thing Traci Braxton did is that she constantly check the blood sugar and blood pressure. She completely changed her lifestyle and eat only zero carb foods. Traci Braxton took a lot of spinach and wheat bread for weight loss. Traci Braxton is also very conscious of her exercise schedule. She never miss any day and she was very consistent at her gym. Traci used to work out at least 2 hours daily to keep her blood sugar at control.

Even on the 4th of july, on her son's wedding reception Traci Braxton was seen so sick and unhealthy. That is due to her a diabetic condition. Traci Braxton does all to keep her in the right sugar level. Traci Braxton have lost more than 20 kilos due to diabetic meal plan. The American singer want to lose more weight to keep her healthy.

Traci Braxton love for her family.

No. Traci Braxton is not sick. The reality star is going through her diabetes and on medication.