Californian made 16000$ in seven hours by Twitch live streaming. 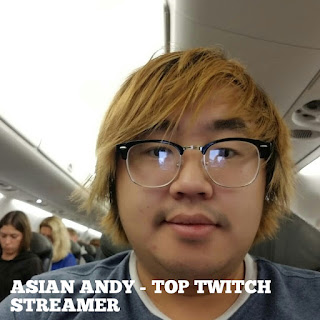 We live in internet era where millennials make thousands of dollars by simple make up tutorials or live streaming video games. Kylie Jenner is one such a example. She beat Facebook founder Mark Zuckerberg by becoming youngest billionaire. Kylie sells her beauty products online and by promoting famous brands. There are several others on the internet who makes money in simple ways.

Asian Andy is from California and work as a  driver. He makes around 20$ per day which is very hard to survive in one of the expensive states. Andy tried different part time jobs from working on different stores and shops.

One day through one of his friend Andy came to know about Twitch. It doesn't came easily. Andy is a active Twitch streamer for one year. He covers different topics and do different tasks based on the request.

What is Twitch streaming?

How to make money on Twitch?

Twitch has a partner program just like Youtube partner program. You will be eligible to earn money once you reach 500+ concurrent viewership count. You can also earn through their affiliate program where you can earn by selling Twitch products. You also have subscription program where you can earn through subscriptions. The insane ways are ads and bit donations. You can make tons of money through paid promotions and get bit donations for doing simple live tasks. That's how Andy made his money. You either have to be funny or expert at your work.

Pros and Cons of Twitch.

Many people not aware of Twitch popularity. Twitch is also hot and less familiar ways of earning money online.

The Cons includes copyright strikes for using the music and some video games clips.

Overall it's good to earn some good money on Twitch as the youtube got saturated with overwhelming contents.

On average active users make around 3K to 5K per month through ads, bit promotions and subscriptions. The highest Twitch earner is Ninja AKA Richard Blevins. He has around 16 million followers on Twitch. Most of the time he makes money by live streaming Fortnite game. Ninja's networth is around 30 million. He recently signed a big million contract with Red Bull and Adidas.

Advice for the people who wanted to join Twitch.

Just like any other platforms nothing will happen overnight. You have to be regular and keep on uploading the original content. Why Twitch is the best? Because it is less saturated and looking for more content creators. Increase your influence on social media. Answer the queries and be committed to your audience. Once you are starting on the Twitch you have to be careful for the first thirty days as you prepare for the monetization process. Try to give the original content and improve gradually. You will find success.