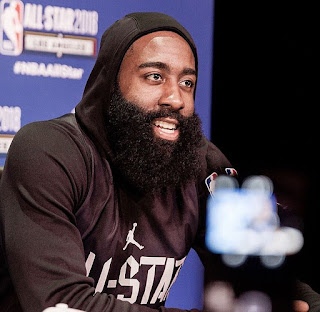 If you are a serious NBA fan. You will never forget the 2015  James Harden commercial with beard guru. They call it as million dollar beard. The beard in NBA is not new even Steph Curry have one. It represents machoness in their game. The dominance of beard men in NBA. We will see how our Houston Rockets star James Soften turned into James Harden over the decade. His love for his mother Monja Willis.

James Edwards Harden was born in August 26, 1989. James almost spent no times with his father. His father James Harden Sr was a Navy man and shifted to different parts of the country. Later he was addicted to drugs and showed no love for young James. At one point James Harden even stopped using his middle name 'Edwards'.
His hometown is filled with drugs and crime. But it was James mother Monja Willis shaped and protected James Harden. At 12 James Started to develop his passion for basketball. He also suffered from asthma during that time which made it difficult to pursue his basketball career. James was so sincere in his sports. He is so punctual and committed to his craft.
At the beginning of his career. When he was playing for Oklahoma City Thunder. He scored fourth highest three point percentage below the age of 21 in NBA history. It is his hard work, sheer determination and love for her mother that made him at the top of the career. He is awarded with NBA sixth man of the award, NBA assist leader, All NBA team award at 2017, 2018 and 2019. He got MVP award at 2018. He won gold medal at london olympics. Recently James Harden signed a 200 million dollars contract with adidas.

When asked about the beard. He said, "I started to develop it at my high school and started to grow during my days with Oklahoma City Thunder". At the beginning his mom Monja Willis found the whole thing weird. She said there is no one in NBA team with that much big beard.
James Harden doesn't apply any special creams. He is always busy in practicing and workouts. It grows naturally for him. The only person who touches James Harden beard is his barber. Growing a beard is trending among the millennials. If you want to grow your beard like James Harden. Then follow this simple steps.
• Do a regular shave. Shave at least twice a week. That will remove the dead cells.
• Apply a lot of cucumber. Cucumber will make the beard smooth and stronger.
• Take iron and protein. Eat a lot of spinach, nuts and fish. Iron keeps the hair thick and protein helps the beard grow stronger.
• Wash it regularly. Have the habit of washing your beard regularly. There is more chance of bacteria of fungus formation on the beard. So it is good to use a anti bacterial and fungus soap.
• Quit smoking and drinking. Not only beard but for the overall health. This will cause serious damage to your health. Eat green and do a lot of exercises. Eating a pomegranate will boost the blood circulation in your body and thus helps in your beard growth.
• Take care of your body. Have the habit of cardio or intense exercises. Do it at least one hour a day. If you are not spending time for your workouts. You are definitely going to spend your days in hospital.

These are the pictures of his high school days. James Harden with no beard. Where he lived a quiet and contrast life. The soft and dedicated boy. However he later developed the beard in his NBA days. He is lovingly called "The beard" by his fans. Beyond his beard he is one of the powerful shooter in NBA history.
James Harden no beard. High school days. 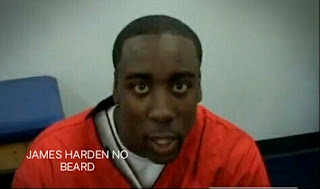 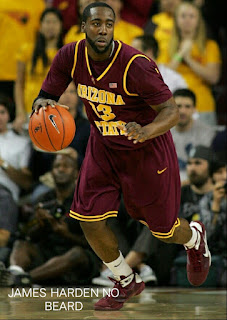 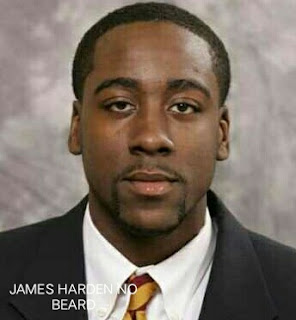 Not only his beard. James Harden is a hardworking and dedicated sportsman.